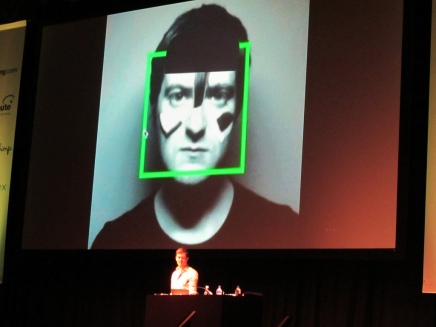 Jemima Kiss at the Guardian asked me to write up my impressions of this year’s dConstruct conference. An edited version of this is online at their website, but I wanted to post the whole thing somewhere, so here it is.

dConstructing The Invisible
by Honor Harger, for The Guardian, 8 September 2013

Cyborgs, hackers, internet toasters, theremins, spying rubbish bins and fanfic were just some of the dizzying array of topics explored in the dConstruct conference in Brighton last Friday, confirming its reputation as one of the leading digital ideas conferences in the UK.

Now in it’s ninth year, dConstruct, organised by design agency Clearleft, consistently attracts some of the biggest names in design and technology, such as Don Norman and Kevin Slavin, who speak alongside critical new protagonists such as James Bridle, Matthew Sheret and Tom Armitage. Thus, attendance at dConstruct has become almost a prerequisite for the digital design community, with it’s 900 tickets inevitably selling out – on one memorable occasion in less than an hour after going on sale. In recent years, it has also been distinguished by a tendency to include vibrant contributions from speakers from outside the field, such as a dazzling turn by James Burke last year, and this year by artist, Sarah Angliss and comedian, Adam Buxton. Their inclusion marks an acknowledgement that the debates surrounding digital technology have a wider cultural relevance, and resonate with an audience that is far broader than the web community itself.

In fact, dConstruct itself is now part of a larger festival – Brighton Digital Festival – a month long celebration of digital culture, that features no less than 150 exhibitions, conferences, workshops, performances, screenings, and meet-ups. From 2-7 September, the festival had an unbroken week of continuous conferences, starting with Reasons to be Creative and the Connected TV conference, continuing with our conference, Improving Reality, and culminating with dConstruct. Tech entrepreneurs, designers and digital culture aficionados flew in from as far afield as Montreal, New York, Silicon Valley and Sydney to attend this first week of Brighton Digital Festival, transforming Brighton into a hotspot of digital culture.

dConstruct remains unquestionably one of the key draws for visitors to the festival. This year’s conference was following hard on the heels of what many have described as the best of the lot of them, the 2012 edition , and so expectations were high.

Organised around the theme “Communicating with Machines”, the morning session began with self-described “cyborg-anthropologist”, Amber Case from Portland, who took the stage wearing Google’s controversial augmented reality eyewear, Glass. In a spirited historical analysis of wearable technology, which began with the crucial work of artist, Steve Mann, Case discussed persistent architectures, liquid interfaces, the politics of augmented reality, and how location-based games can change our relationship with our urban environment.

Next up was Luke Wroblewski, who outlined the challenges of designing interfaces for the now bewildering array of inputs and sensors – microphones, accelerometers, cameras, magnetometers, gyroscopes and GPS receivers – which we have in our mobile devices. Wroblewski ended by giving us a glimpse into the near-future, where wearable devices will use our own heartbeats to establish our identity. An electrocardiogram sensor in prototypes devices, such as Nymi, monitors the wearer’s heartbeat, to authenticate who they are. The device can then act as a universal ‘key’ to unlock hardware of software. The ethical implications of a device that uses our hearts, as a key to unlock our car doors, were not discussed.

One of the things which distinguishes dConstruct from other tech conferences on the circuit, is its willingness to engage with some of the difficult and uncomfortable issues which often arise as a result of the proliferation of new technology. As such, developer Nicole Sullivan‘s excellent talk about how to manage online bullying and ‘trolls’ felt urgent and timely, in light of the horrific harassment of Caroline Criado-Perez by trolls on Twitter, which has finally resulted in her deleting her account .

dConstruct has a playful side as well, and this was beautifully exemplified by talks by Simone Rebaudengo, who showcased his delightfully whimsical socially-aware connected toasters, and the charismatic founder of bookmarking service, Pinboard, Maciej Ceglowski, who gave a warm and funny account of his experiences working with the online fan-fiction community.

At one point in the first session of the day, Amber Case (above) made the observation a key role for digital designers today is to “make the invisible visible”. The importance of revealing the systems, materials and mechanisms which enable contemporary digital culture, was the key theme of the previous day’s conference, Improving Reality, as well as the Immaterials exhibition on at Lighthouse. Case’s provocation, plus a gently excoriating star-turn from the Pervasive Media Studio‘s Dan Williams, extended an important theme, which is running throughout Brighton Digital Festival.

User experience designers, and interaction designers, have increasingly been advocating for ‘invisible’ design, which allows technology to get out of the way, to disappear, enabling ‘seamless’ interactions between us and our technological devices. But there is a growing critique of this philosophy emerging within both the design and art communities. This was at the heart of Dan Williams‘ talk, Unexpected Item in the Bagging Area, which was, for me, a highlight of this year’s dConstruct.

Beginning with an anecdote about the development of the Whole Earth Catalog in the 1960s by Stewart Brand (described by Williams as “basically the Argos catalogue for hippies”), Williams expertly unfolded a story about the unintended consequences that emerge when a new technology is introduced into society. He pointed to the terrifying pervasiveness of surveillance technologies in our lives, drawing on art projects such as the Manifesto for CCTV Filmmakers, which shows how CCTV cameras can be put to creative use, and CV Dazzle by Adam Harvey, which ingeniously illustrates ways we can camouflage ourselves from surveillance and machine vision. Referring to the Critical Engineering Manifesto by Julian Oliver, Gordan Savicic and Danja Vasiliev, Williams called into question the seamless, invisible technological systems which underpin much of our digital culture. Quoting fellow dConstruct alumni, James Bridle, Williams noted:

“Those who cannot perceive the network cannot act effectively within it, and are powerless. The job, then, is to make such things visible.”

The tide of international surveillance scandals, revealed in the Guardian  by Edward Snowden, have exposed the deep reach of technological systems into our daily lives. dConstruct was an important reminder that we must better equip ourselves with an understanding of how these systems work, so that we can act more intelligently within them.
That starts by making the invisible, visible.